Alistair McGowan is a cherished household name, a master impressionist, a stand-up comic, an actor, a pianist, a writer of sketches, articles, stage and radio plays but is still probably best known to British audiences for ‘The Big Impression’ which was, for four years, one of BBC1’s top-rating comedy programmes – winning numerous awards, including a BAFTA. In 2017 Sony Classical released ‘Alistair McGowan; The Piano Album’ which went to Number One in The Official Classical Charts and no 2 in the Classic FM chart and was John Brunning’s Album of The Week.

Reverend Richard Coles is sometimes described as “Britain’s most famous Vicar”, a regular presenter on Radio 4’s Saturday Live and on Radio 2. A colourful career saw Richard form the pop band The Communards in the 1980’s and he’s the only vicar to have had a number one record, so he’ll have plenty of tales to share from his extraordinary journey from popstar to priest to Strictly Come Dancing and beyond!

Garry Richardson joined the BBC in 1974 and “here’s Garry with the sport” has been heard on Radio 4’s Today programme since 1981, making him the longest serving member of the team and giving him a wealth of hilarious “behind the scenes” stories to tell! He is infamous for his racing tips which never win and once famously got David Cameron to select two horses on his first day as Prime Minister. Garry is also the regular presenter on 5 Live’s Sportsweek, and has interviewed some of the world’s most famous names, including an impromptu 15 mins with President Bill Clinton, live from Wimbledon’s centre court.

Newsreader Charlotte Green was once voted the nation’s favourite voice in a Radio Times Poll and is one of the country’s most recognisable and cherished voices. Famous for her warm tones, her diction and her poise, her fit of the giggles live on air made her a national treasure, with even Prince Charles thanking her for her “Impossibly infectious giggling”! With appearances on the News Quiz and The Hitchhiker’s Guide to the Galaxy, Charlotte is a great raconteur and can still be heard on Saturday evenings reading the football result on Radio 5 Live.

Joe Stilgoe is an internationally acclaimed singer, pianist and songwriter, whose live shows are a mixture of virtuoso musicianship and breathtaking theatricality, combining on the spot improvisation and the quickest of wits.

Joe has toured the world with his band and as a solo act, and works extensively on radio, having hosted BBC Radio 2’s Friday Night is Music Night and his own show on JazzFM, and guested on The Now Show and The Horne Section for Radio 4. He appeared in the smash-hit musical High Society at The Old Vic and enjoyed sell-out runs at the Edinburgh Festival Fringe, garnering acclaim and glowing reviews. 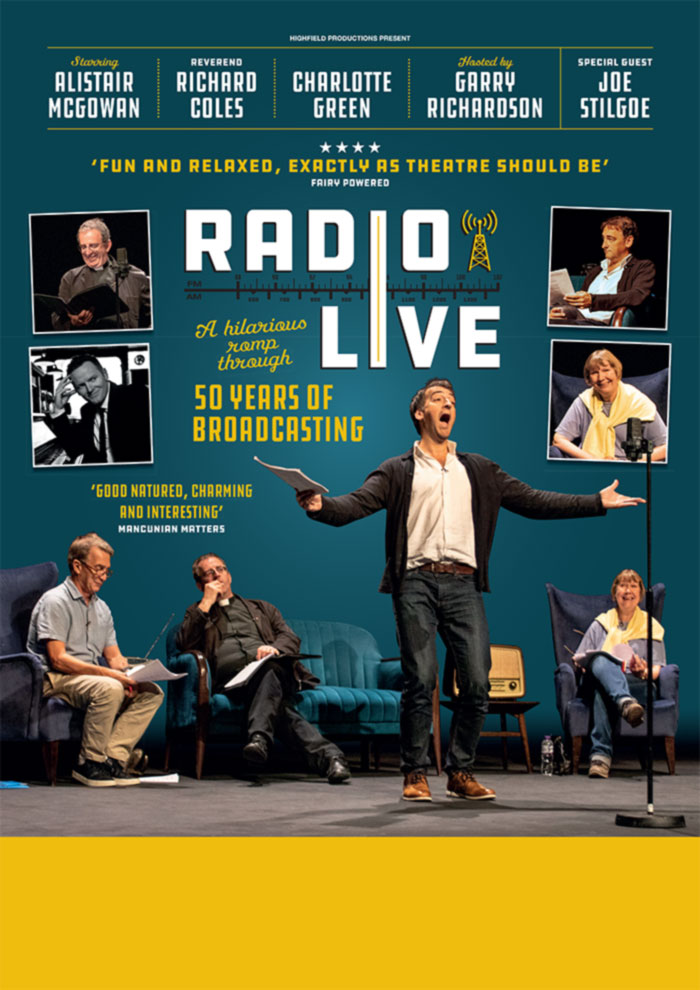